Embracing Our Past and Creating Our Future

Embracing Our Past and Creating Our Future

The history of Canada is reflected in its diversity. As the country grew, people from various cultures and backgrounds would interact with each other, often resulting in personal relationships being formed. French and Scottish fur traders married and formed families with the local aboriginal women with their descendants creating a new and unique culture. The word Metis originates from the latin word “mixtus” which quite literally means mixed. As the fur trade grew many Metis settlements were established. These Metis people were an integral part of the history of the economic development of Canada and often French Canadian voyageurs lived in these communities.

Jon MacDonald can trace his roots back to the 1600’s when his European ancestors immigrated to Canada and worked in the fur trade. A natural outdoorsman, he loves to fish and as a young adult was very active in sports, especially hockey. In most northern communities, hockey was and still is almost a right of passage with some residents going on to play professionally.

When Jon sat down with Linda Williamson of Schreiber Media Centre, one of his comments centred around family and the connection between living in a small town and the relationships that occur. Jon is also very active in community affairs and sits on the board of the local Jackfish Metis Association, a community outreach organization that benefits not only Metis and First Nations people but the community of Schreiber and its residents. He is a strong believer in volunteerism and a strong promoter of residents becoming involved in their communities. Jon sees volunteering as the lifeblood in any town and became active in politics when he was appointed to council.

Jon has had quite a varied career life as well even working as a police officer for a few years, which he says gave him an interesting perspective on people.

As a senior citizen he also embraces technology and realizes the benefit it can have in bringing about change. In today's modern age we often think of technology as anything related to computers and communication but technological advances can take on many forms. One technical evolution that he witnessed was the introduction of the diesel locomotive. This changed the face of railroading forever and like any technological change it created an evolution in how goods were transported. It also had an impact on how people would rethink their career choices, especially in regards to job losses due to advancements in technology.

Small towns only survive if there is an industry in place to attract new residents and fuel economic development. The parallels between the world we live in today and the world of the past are not always obvious but when we acknowledge our history and embrace our future we can all benefit from the changes. 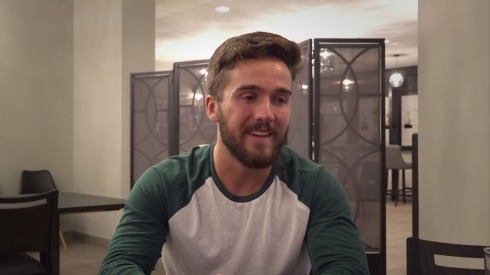 Amanda Moddejonge, the local Green Party candidate dropped in to Schreiber to talk with Schreiber Media Centre
ON
- Schreiber

Gardening has had a bit of a resurgence as people try and put the year of COVID behind them. It also has other benefits.
ON
- Schreiber